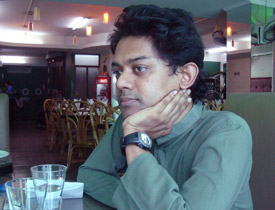 Project themes have been described as “how to make engagements with a revolutionary past meaningful in the sudden eruption of a revolutionary present” (Kaelen Wilson-Goldie, Bidoun), “gently questioning the efficacy of activism” (Brian Boucher, Art in America) and “not yet disillusioned fully with the capacity of human society” (Vijay Prashad, Take on Art). The work has been featured in Granta, Rethinking Marxism, Modern Painters and Springerin. Art Review selected the current project for the “Future Greats 2012” list.

The Young Man Was

The Young Man Was is a history of the 1970s ultra-left, with each chapter in a different medium: journal essay, performance, installation, collage, video wall, photography, and film. The research pivots around the tumultuous first ten years of post-1971 Bangladesh, with accidental intersections with Asian and European histories. The tragic arc is of movements that promise rapid revolution, often through rupture and rebirth, but once in power, transform into a mirror image of the defeated previous regime. Postcolonial liberation narratives are scarred by the ruins of such defeated romanticism.