Translator II: Grower is a moving robot that moves around the periphery of a small, white room. Responding to changes in carbon dioxide levels in the room as viewers come and go, the robot draws varying heights of “grass”—lines of green ink—on the walls. Every few seconds, the robot reads the carbon dioxide levels via a small digital sensor mounted on its shell, draws a green line after each reading, and moves a quarter inch before taking its next reading. At the end of the installation the bases of all four walls are covered with fine green lines, which together resemble a cross-section drawing of a field of grass. The height of the “grass” directly reflects the flux of public attendance, which impacts the “health” of art institutions. This project makes explicit the interdependent relationship between human and machine, as vital entity to vital entity. 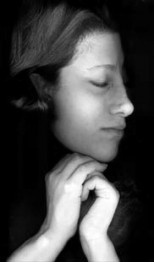 Sabrina Raaf is a Chicago-based artist working in both experimental sculptural media and photography. She is a producer of creative machines and machines that independently make art when cross-pollinated with human interaction. Raaf’s work has been shown widely in the U.S. and abroad, including shows at Larimore Project in Seattle, Wendy Cooper Gallery in Chicago, Kunsthaus Graz in Austria, the Museum Tinguely in Basel, and the International Symposium of Electronic Arts, among others. She has been reviewed in Modern Painter, Art in America, Contemporary Magazine, Gizmodo, the Chicago Tribune Sunday Magazine, Leonardo Magazine, and The Washington Post. Raaf received an MFA in Art and Technology from the School of the Art Institute of Chicago in 1999 and is an assistant professor in the School of Art and Design at the University of Illinois at Chicago.