Filmmaker Naomi Uman creates a personal, anecdotal documentary on 16mm film, based on her trip to the Ukraine to live with a family of dairy farmers. Uman, a descendant of Eastern European Jews, moves to Ukraine for ten to twelve months, returning to the land her ancestors left a century ago to escape persecution. In the film she uses her experience as a foreigner to critique her own American cultural perspective. As in all her work, Uman uses film stock as fabric, a material with which to piece together a temporal exploration of the tiny events that make up our world. 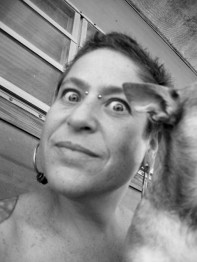 Naomi Uman’s experimental documentary films have been exhibited widely at the Sundance and Rotterdam International Film Festivals, The New York Film Festival, and the San Francisco International Film festival among others; she has also screened her work at The Guggenheim Museum, The Whitney, The Smithsonian, and Mexico City’s Museo de Arte Moderno. She has received funding from the National Endowment for the Arts, The Guggenheim Foundation, The Mexico/U.S.A. Fund for Culture, and the Bank of Austria. She teaches at the Fine Art Museum in Mexico City, leading workshops in handmade filmmaking. She received an MFA in Filmmaking from CalArts in 1998.