Richard Nixon is a 17-part film series that uses the 37th United States President’s life as the context to aesthetically elevate American history into poetic mythology, similar to Geoffrey of Monmouth’s 12th century Historia regum Britanniae. Throughout the film Nixon’s life functions as a lens with which we explore America in the 20th century and the physical, mental, and spiritual impact it has on those involved in the events shaping the times. 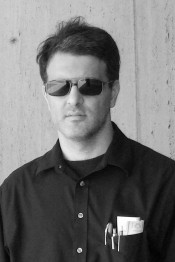 James Fotopoulos is a filmmaker who began production on his first feature film, ZERO, in 1995. In 1998, he founded Fantasma for the production of his second feature, Migrating Forms, and would continue to create a prolific body of feature-length and short films. Some of these films include Back Against the Wall, Christabel, Families, The Nest, Esophagus, Alice in Wonderland and Dignity. Fotopoulos’ films received a retrospective at the Anthology Film Archives; premiered at the Museum of Modern Art, MoMA PS1, Festival del Film Locarno and the Museum of Arts and Design; and have screened widely including International Film Festival Rotterdam, Sundance Film Festival, London Film Festival, Whitney Biennial, Walker Art Center, Museum of the Moving Image and the Andy Warhol Museum, among many others