Narcissister works at the intersection of performance, dance, art and activism, integrating prior professional dance and commercial art experience with long-standing visual art practices in a range of media.

Narcissister takes a smart, sassy, spectacle-rich approach to exploring the kinds of sexual fetishism that notoriously fix racial and gender stereotypes. She combines unabashed eroticism, humor, and poignancy to stretch viewers’ sensibilities and achieve surprising psychic effects. Narcissister Organ Player is originally a performance that takes place in a metaphorical restaurant where Narcissister, unsated by a few spinach leaves, tries to eat the restaurant furniture and ends up ”consuming herself” by entering and traveling through her own body, represented by an enormous onstage puppet. As the performance plays out on stage, in real life, her mother’s long-term illness brings on a decline that ends in death. The artist’s loss provokes an exploration of how her own complex, interracial family history has compelled her to create the masked, erotic performance character Narcissister. Enriched by Martha Colburn’s original animation, Narcissister Organ Player is a hybrid personal documentary and performance film that is a vibrant portrait of a family, a radical artistic practice, and an exploration of how ancestral data is stored in our bodies, impacting the lives we lead. 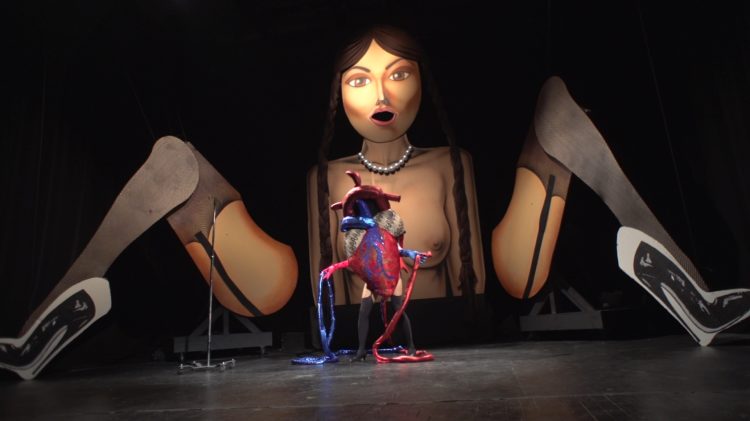 We spok to Narcissister about her Creative Capital project, Narcissister Organ Player, a film that blends documentary, animation and performance to explore how the loss of the artist’s mother and her family history led to the creation of the masked persona. Narcissister works at the intersection of performance, dance, art and activism. Integrating prior professional dance and commercial art experience with long-standing visual art practices in a range of media including photography, video and experimental music, she has presented work at The New Museum, PS1, The Kitchen, Abrons Art Center and many nightclubs, galleries and alternative spaces. Her performance piece, Organ Player, was nominated for a 2013 New York Dance and Performance ”Bessie” Award. Narcissister has also presented work internationally at Music Biennale Zagreb, Chicks on Speed’s Girl Monster Festival, Festival of Women Ljubljana, and Camp/Anti-Camp festival Berlin, among many others. Her videos have been included in exhibitions and festivals worldwide. Her video The Self-Gratifier won Best Use of a Sex Toy at Good Vibrations Film Festival 2008; Vaseline won the main prize in 2013. Interested in troubling the divide between popular entertainment and experimental art, Narcissister appeared on America’s Got Talent in 2011. In 2013, she had her first solo gallery exhibition at envoy enterprises.