M/x is a large interactive digital video projection onto the towers of the MacDonald Observatory in the Davis Mountains above Marfa, Texas. This is the first in Luke Savisky’s series of projection pieces in remote locations. M/x‘s central theme is the science and technology that allow humans to redefine our relationship to nature, even as that same environment faces imminent destruction. Savisky uses found and original 16mm and 35mm film footage, often layered into a montage through the use of multiple projectors; M/x weaves together a sensory, non-linear narrative that exists in direct relation to the site on which it is projected. 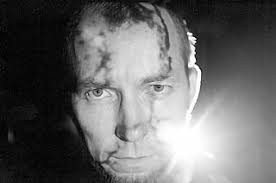 Luke Savisky’s multi-media performances have transformed natural and architectural settings worldwide for audiences from 1 to 50,000, exploring the limits of visual media through the use of manual film montage, mobile projection, kinetic sculpture, 3D projection surfaces, live music, choreography and performers in unique and unlikely environments. His work includes I/Tx (The I/Eye of Texas), an interactive projection of viewer’s eyes onto an 85ft water tower in downtown Austin, TX and a twenty story 35mm live architectural film montage interacting with building climbers for First Night Austin. Savisky was chosen as official media artist for the 2005 Sundance Film Festival and is the recipient of numerous awards and grants including: The Texas Filmmakers Production Fund, the Austin Film Society’s 1st D. Montgomery Award, and the 2007 Austin Table of Critics Award for Best Individual Project. Savisky was also nominated for the first Arthouse Texas Prize and the Rockefeller Foundation New Media Grant.