Ela Troyano is an interdisciplinary filmmaker, born in Cuba and based in New York City.

A rebel and innovator, pop singer Lupe Yoli (aka La Lupe or La Yiyiyi) was renowned for her emotional performances. La Lupe Queen of Latin Soul tells her story through character-driven interviews in first-person anecdotes, in an oral history much like those found in a folk ballad or a bolero. Born in Cuba in 1936, she rose from childhood poverty to scandalous overnight success in the glamorous nightclub scene in La Habana in the 1950s. She emerged in New York in the ’60s as The Queen of Latin Soul, performing alongside peers such as Mongo Santamaria, Tito Puente and Celia Cruz. The documentary evokes two groundbreaking cultural periods through interviews and rare archival footage: pre-revolutionary 1950s La Habana and the burgeoning Latin music scene in New York City in the 1960s and 1970s. A long-time gay icon often described as the first performance artist, La Lupe remains ahead of her time. 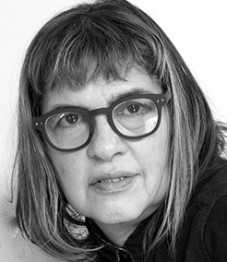 Ela Troyano is an interdisciplinary filmmaker, born in Cuba and based in New York City. The Arsenal in Berlin presented a career survey of her work in 2012 including rarely seen films from the eighties. Recent shows include live film performances at the New Horizons Film Festival in Wroclaw, Poland (2011) and Berlin International Film Festival (2010). She is currently collaborating with her sister, performance artist Carmelita Tropicana on Post Plastica, a hybrid performance presented at the Colony Theater in Miami (2013) and El Museo del Barrio in NYC (2012). Her films include the PBS documentary La Lupe: Queen of Latin Soul and featurette Carmelita Tropicana Your Kunst is Your Waffen (Your Art Is Your Weapon). Troyano has worked as a writer/director in film, theater and television and improviser in experimental music and dance. She attended writing workshops with Maria Irene Fornes at INTAR and Gabriel Garcia Marquez at Sundance. Select awards include funding from the Ford Foundation, Jerome Foundation, Latino Public Broadcasting, Independent Television Service, New York State Council on the Arts and United States Rockefeller Fellowship.