Franco Mondini-Ruiz created a working installation/store based on the botanicas found in New York, San Antonio, and other United States Latino communities. Mondini-Ruiz secured a storefront for one year for this whimsical, interactive installation that sold traditional religious artifacts, conceptual artwork, and folk art. By establishing a space for Infinito Botanica in New York, Mondini-Ruiz attempted to bridge some of the existing political and aesthetic gaps among Latinos in the United States, while questioning distinctions between “traditional” and “high” art. 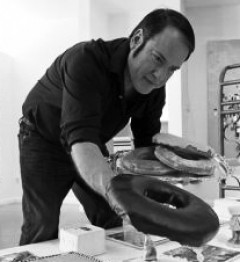 A native of San Antonio, TX, Franco Mondini-Ruiz lives and works in New York City. He takes a variety of approaches to creating art, working in installation, performance, painting, sculpture, and short stories. His solo exhibitions include Mexique (2000) at the Museo del Barrio, New York, Infinito Botanica (1999) in San Antonio and at Bard College, and Tableau Vivant (1998) at the Alamo in Texas. His work was also featured at the 2000 Whitney Biennial and at several regional museums. He has received funding from the Pollock-Krasner Foundation, ArtPace, a New Forms Regional Initiative Grant from the National Endowment for the Arts and the Rockefeller Foundation.