Adrift was an evolving multi-location performance event that combined movement through 3D space, multiple narratives, and richly textured sound streaming between virtual and real geographical locations. A collaborative work by three artists (writer and composer Helen Thorington, composer Jesse Gilbert, and architect Marek Walczak), Adrift involved an interplay among three environments: text, sound, and VRML 3D, where borders were permeated, new relationships developed, and the expressive power of the net-worked medium made visible and audible. The content focused on a harbor, a city, and the human body. As the three artists and their computers passed information back and forth in real time, an interaction among the senses, and among the geographies, scales, and narratives represented in the work was created. The fluid perceptions and the multiple intersecting journeys they suggested lay at the heart of this net-worked performance. 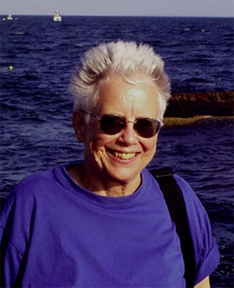 Helen Thorington began her career as a writer with short stories and other fictional forms that were published in small press magazines and journals throughout the 70s. In 1977 she made a transition to sound. Her early sound/ music works include compositions for post-modern dancers Bill T. Jones and Arnie Zane, among them Monkey Run Road, Blauvelt Mountain, and Valley Cottage; and works for radio. Her productions for National Public Radio were among the first radio art works broadcast nationally. From 1977 to 1998 Thorington continued to produce for radio. Her programs were aired nationally and internationally in over fifteen countries. Commissions included works for RAI (Italian radio), RNE (Spanish Radio) and ORF (Austrian radio). Thorington also composed sound scores for film. Her first film score was for Optic Nerve by Barbara Hammer, which premiered at the Berlin Film Festival and the Whitney Museum of American Art’s Biennial exhibition. She received a New York State Council on the Arts Music Commission to create a second sound score for Hammer’s Endangered, also presented at the Whitney Biennial.