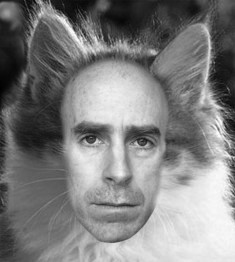 Deke Weaver is a writer, performer and video and graphic artist whose interdisciplinary performances and videos have been presented in Australia, Brazil, Canada, Europe, Russia and the United States in experimental theater, film/video, dance and solo performance venues. His work, described as “explosive” (SF Weekly) and “brilliant” (The Village Voice) has “handcuffed a secure storytelling knack to a performance style that pushes the energy envelope toward hyperventilating madness” (Sidewalk.com). He also contributes film and video to dance and theater works in the U.S. and abroad. Weaver has been a resident artist at Yaddo and HERE, a two-time resident at Ucross, a four-time fellow at the MacDowell Colony and a three-time recipient of NEA regional film/video grants. From 1999–2005, Weaver was the Senior Animator for the Showtime Networks’ Broadcast Design Group. He is currently an Associate Professor in the School of Art and Design’s New Media Department at the University of Illinois, Urbana-Champaign.

Deke Weaver is a writer, performer and video and graphic artist.

Inspired by the literary concept of the unreliable narrator and the medieval bestiary, which gave every living thing a spiritual purpose, The Unreliable Bestiary is an ark of stories about animals, our relationships with them and the worlds they inhabit. In addition to an encyclopedic set of books and a website, The Unreliable Bestiary includes performances for each letter of the alphabet, with each letter representing a particular animal or habitat. With the help of composer Chris Peck, choreographer Jennifer Allen and scenic designer Andy Warfel, each performance is scaled to different venues—from traditional theaters to intimate living rooms, outdoor pavilions and national park amphitheaters. MONKEY, the project’s first performance, opened on Darwin’s 200th birthday. The second performance, ELEPHANT, was held in a cavernous livestock pavilion and featured video projected on two 90-foot long screens, an enormous elephant puppet and a cast of thousands. WOLF premiered in Fall 2013 and featured a three-hour bus trip and walk in the woods.