Whispering Pines ∞ is an opera project by artist Shana Moulton and composer Nick Hallett that incorporates performance, interactive video and music. Its creators plan to reshape Whispering Pines 10, a previous collaboration, for the internet in the format of a serial drama, in addition to developing new material for the stage that will expand the live animation techniques and musical vocabulary of its predecessor. Whispering Pines ∞ aspires to create a form of opera that exists across media—from the stage to the gallery to the computer screen. The project is viewable as a website. 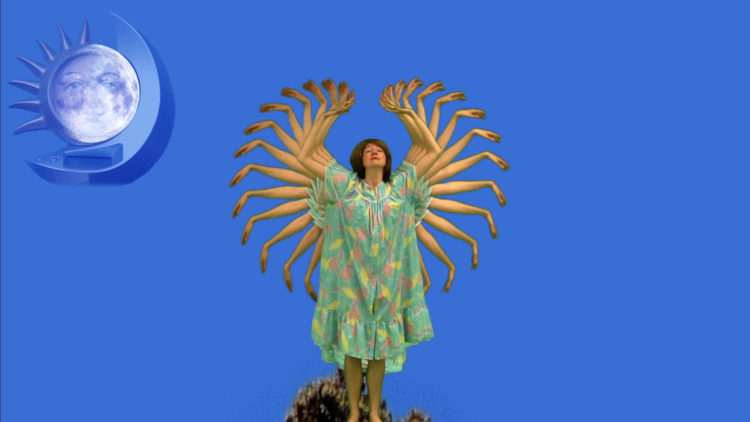 As the world remains isolated indoors due to the outbreak of COVID-19, Shana Moulton and Nick Hallett have made their Creative Capital Project, Whispering Pines 10, viewable for free. We speak to the artists to hear more about their digital soap opera. Nick Hallett is a composer, vocalist, and cultural producer, who works between the worlds of sound, art, and performance. His ongoing collaboration with Shana Moulton includes the internet soap opera, Whispering Pines 10. Since 2014, he has been music director of the Bill T. Jones/Arnie Zane Company, scoring and performing in six evening-length dance-theater works. He received a 2017 New York Dance & Performance “Bessie” Award for Variations on Themes from Lost and Found: Scenes from a Life and other works by John Bernd, in collaboration with Ishmael Houston Jones and Miguel Gutierrez.  As music director to the multimedia artist Joshua White, Hallett was instrumental in producing a decade-long revival of the iconic Joshua Light Show.  Hallett’s music has been performed at BAM, The Whitney, The Kitchen, PERFORMA, New Museum, Hayden Planetarium, ISSUE Project Room, and Roulette. He is on the faculties of Eugene Lang College at The New School and School for Visual Art. Moulton earned her BA from University of California, Berkeley, in art and anthropology and her MFA from Carnegie Mellon University. She has shown her work extensively both in the U.S. and internationally, including solo shows at the Palais De Tokyo in Paris, Yerba Buena Center for the Arts in San Francisco, Art in General in New York, the Zabludowicz Collection in London, the Museum of Fine Arts in St. Petersburg, and the Museum of Contemporary Art in Cleveland. She has performed at The Museum of Modern Art, The New Museum of Contemporary Art, The Kitchen in New York, The Andy Warhol Museum in Pittsburgh, The San Francisco Museum of Modern Art, and many others. Moulton’s work has been featured in Artforum, The New York Times, ArtReview, Art in America, Flash Art, Artpress, Metropolis M, BOMB Magazine, and Frieze, among others. Moulton is an Assistant Professor of Art at UC Santa Barbara.