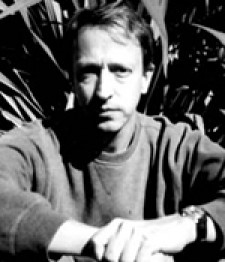 Lewis Klahr has created a signature style that uses shadows, stillness, and staccato movements as an expressive language in experimental film and collage. One-person shows of his work have appeared across the country including at the Museum of Modern Art (New York), the Whitney Museum (New York), the Carnegie Museum (Pittsburgh), and the Museum of Fine Art (Boston). His grants include fellowships from the Guggenheim Foundation, National Endowment for the Arts, and New York State Council for the Arts.

Lewis Klahr’s collage films have always mimed the processes of memory by pulling together the discards of contemporary life (images from ads, text books, or comic books, objects such as game pieces, menus, playing cards) into scenarios that seem like some Hollywood film dimly remembered. In Daylight Moon, he reaches even further back, to try to recall the moments in which a small child configures the world out of patterns of visual fascination, a mode of seeing that relies on touch and the feel of things rather than deep space. One of his most abstract films, Daylight Moon rarely reveals a human figure. Instead of characters, Klahr gives us the play of enigmatic spaces and empty sites that promise both the invitation of desire and the discovery of crime.