Your Blog Won a Grant: Now What? – Arts Blogging, Part 1 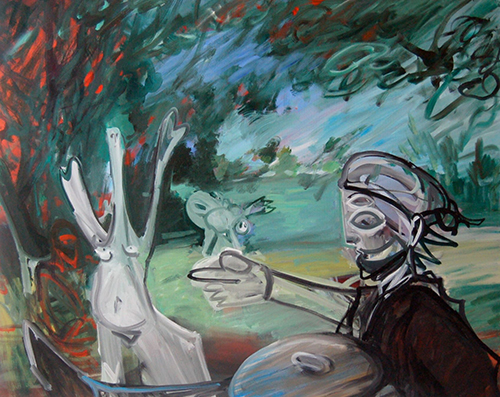 Blogs are by no means new, but the Creative Capital | Andy Warhol Foundation Arts Writers Grant category for blogging is still a unique award in its field. In some cases, it can be the only way arts writers can earn money for their personal blogs. In addition to issuing awards for articles, books, and short-form writing, the Arts Writers Grant Program supports bloggers writing on a range of art issues.

I wanted to get a sense of how arts bloggers specifically have used their Arts Writers grant, so I reached out to a few past grantees. Their answers were so informative and important, that I will divide the interviews into a three part series. Nate Larson and Marni Shindelman, “Geolocation.” From Kate Albers’ interview with the artists on her blog Circulation/Exchange

The bloggers who contributed to this series include Kate Albers, Daniel Temkins, Sharon Butler, and Gelare Khoshgozaran and Eungsong Kim. Albers maintains Circulation/Exchange, featuring short critical essays exploring the intersection of social media and photography. Temkin’s esoteric.codes documents the history of obscure programming language and bridges the hacker and arts community. Founded in 2007, Sharon Butler’s Two Coats of Paint publishes commentary about painting, artist interviews and studio visits. Khoshgozaran and Kim’s contemptorary is devoted to alternative and emerging artistic practices by women of color, queer and immigrant artists in the U.S.

So Your Blog Got a Grant—What Happens Now?

Writers who win grants for their blog don’t always just use the money to pay the rent and keep writing. Sometimes the money also helps them rethink their whole angle or go deeper into their subject.

Kate Albers: The grant allowed me to take two semesters of sabbatical (instead of one) from my faculty position at the University of Arizona. It really went entirely to this, straight income replacement. So while the money was spent on pretty mundane things—like rent, groceries, and child care—what it really funded was those extra months of time without teaching or university service responsibilities that I wouldn’t have had otherwise. The value of this is incalculable, and goes well beyond the parameters of what appears on Circulation/Exchange.

Sharon Butler: When I started the blog, I was a tenured art professor at a small state university in Connecticut. Indirectly, the university funded the project for the first four years.

Although I thought leaving the university would give me more time for the blog, I ended up working even harder. I applied for the Arts Writers grant every year and was extremely gratified when I finally got it. The grant enabled me to teach less and blog more. Nominally, I used the money to pay operating expenses—data fees, apportioned rent, and so forth. More broadly, the money bought me time to build up a following and to figure out how to make the blog as self-sustaining as possible. I learned how to do a bit of coding and, working with a third party template, redesigned the site myself.

An #esolang is inherently open-source. The language is not the compiler itself, or any single piece of code, but a set of rules

Daniel Temkin: The first great benefit of the grant was the encouragement it brought to go deeper into this project. I had been working on these interviews since 2011, on and off. At the time I began, esolangs felt like a niche topic, and I had been conducting the interviews for my own research; I wasn’t getting much feedback from the art community at that point. The grant brought many new readers, with more crossover from the academic community, as well as code artists who were beginning to experiment with the form.

The grant put some (welcome) pressure on me to get good interviews and talk to everyone I see as essential to the history of this art medium. Some esolangers who previously had been reluctant to take part came around during 2015; I believe the higher quality and greater frequency of interviews helped convince them to take part, and very likely the Creative Capital / Andy Warhol Foundation names helped as well.

In terms of the money itself, I used it mostly for research. I bought and read a huge number of books in 2015 (I prefer to own books so I can mark up the margins with my own notes, etc)… I also traveled to conferences such as SIGGRAPH, CAA, SXSW, and ISEA, where I would both share my own findings from the blog, and meet and learn from others working in overlapping disciplines. On the other hand, sometimes writers win an Arts Writers grant before their blog is even on the web. Eunsong and Gelare’s contemptorary won a grant in 2015, but only went live this past month. I asked them what happened between the time they received the money and the moment the blog went live.

Gelare Khoshgozaran & Eungsong Kim: A lot of correspondence, organizing, logistics and of course, writing and editing. Besides both of our individual writings for the website—which includes interview features and conversation pieces—we also solicited writing from other writers and artists. All of this required endless communication, most of which was pleasurable but also very time consuming. We also needed a website and a design that could achieve the ambitions of our platform. Also keep in mind that this is a collaborative project, so every decision is made between the two of us, which is rewarding but slower than when only one person is the decision maker.

It’s important to be able to work with the unpredictable surprises in the writing/collaborative process, and to have a good amount of flexibility and ingenuity. And fun! This is such a genuine joy: working together, speaking to artists and writers we love, writing about it, reading each other’s writing and offering suggestions—it’s as close to a constant work party as we can imagine!

The subjects of each blog are diverse, but each set of writers shares a passion for the work they cover. The blog format lets arts writers explore the art and artists without being beholden to a specific set of limits from editors, advertisers or media publications. It’s clear the Arts Writer grant—for blogs, as well as articles, books, short form essays and new media alike—is an important grant in the field.

For more information on the Arts Writers Grant Program’s application and eligibility, check out their website. Part 2 of this series will appear in a couple of weeks! Every month, Creative Capital compiles a list of residencies, grant, and award opportunities as part of our commitment to sharing resources and opportunities for artists working in all creative disciplines. These opportunities have deadlines in November and December 2022.