From Funders to Family: Five Questions for Stephanie Pereira 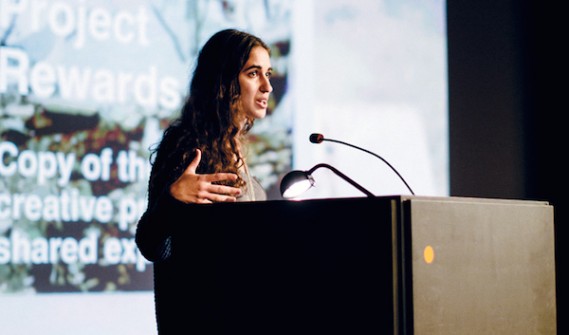 Stephanie leads a workshop on how to use Kickstarter.

Stephanie Pereira is Kickstarter’s Director of Community Education. Trained as an artist, Stephanie spent the first ten years of her career in the nonprofit arts world, before joining Kickstarter in 2011 as the Director of the Art Program. In her current role, Stephanie develops tools and resources for the creative community at-large to be able to realize their creative ideas.
On Monday, August 8th at 7pm EST, Stephanie presents her “Kickstarter School” webinar, an invaluable primer on how to bring a Kickstarter project to life. She will take a look at some successful projects from across the site and explore what kind of rewards work best, how to spread the word about your project, and other helpful tips.
We had a chance to ask Stephanie a few questions about her experience as an artist, curator and funder, as well as get her tips on building a strong creative community.
Hannah Fenlon: Tell me about your transition from art school to Kickstarter. How did your artistic training impact what you’re currently doing?
Stephanie Pereira: While I was in art school I realized two things. First, while I love the creative process and making art, I am not an artist. The other thing that I learned was that I loved organizing events and exhibitions with my friends. I was naturally good at it, and it gave me great satisfaction to bring more creative ideas to the world. By the time I graduated, my artistic practice had even drifted into event production, with installation work that was designed to interrogate the traditional gallery-going experience and transform space through engagement. It’s been well over a decade since I attended art school but the education I got there has stuck with me. The lens through which I look at the world is endlessly creative, project oriented, iterative and (I hope) generous. Because my school had a strong emphasis on critical theory, I am also not content to make work in my professional life that is lazy or represents the status quo.