From Artist to Enterprise: Organizational Structures for Artists Artist and fourth-generation farmer Matthew Moore (2008 Visual Arts) founded the Digital Farm Collective to broaden the understanding of how food grows and preserve growing practices from around the world.

This week, several Creative Capital artists and staff members are in San Francisco for the annual SOCAP conference, dedicated to “increasing the flow of capital toward social good.” Grantees Matthew Moore (2008 Visual Arts), Jae Rhim Lee (2009 Emerging Fields) and Robert Karimi (2009 Performing Arts) participated in the pre-conference Impact Accelerator program designed to jump-start their work as entrepreneurs, using their art practices to affect social change. On Friday, Mark Bamuthi Joseph (2006 Performing Arts) and Taraneh Hemami (2012 Visual Arts) participate in the panel discussion “Making Work: Artists as Activists, Collaborators and Storytellers.”
The idea of artists structuring their practice as an organization or enterprise was explored in a series of Focus Sessions at the recent Creative Capital Artist Retreat. Organized with independent arts consultant Laura Callanan, the “Artist to Enterprise” series included sessions on creative entrepreneurship, structures for artist-run organizations and the importance of protecting intellectual property.
Callanan led the first session, Artist as Social Entrepreneur, which questioned the definitions of social innovation and social entrepreneurship. While social innovation is often seen as existing in particular areas of the tech, business and social sectors, Callanan argues that artists, too, can be social innovators. Thinking outside these professional boundaries, artists can broaden the limits on social innovation.
More than they are bound by sector, social innovators are socially-driven, growth-focused, innovative, resourceful and accountable. We certainly think of well-known figures like Facebook’s Mark Zuckerberg is social innovators, but Callanan asked artists to stretch the limits a bit farther.
One socially innovative organization Callahan highlighted is the Signature Theatre Company, an Off-Broadway theater founded by James Houghton. Signature is an artist-focused—and social-focused—space, offering residency programs for playwrights and presenting social issue plays. Under Houghton’s leadership, the award-winning Company not only grew threefold financially, but also uses donations to subsidize ticket costs. This innovative approach to making new theater accessible to a wider audience puts Houghton and his company on the map of social innovators, no matter the medium.
Callanan suggests that by reframing themselves as social entrepreneurs, artists have greater access to grant funding, investment capital, conferences and professional services. Many artists, and Creative Capital grantees in particular, are focused on social issues; by bridging the gap between art and social entrepreneurship, artists can open up the worlds of business, nonprofits and foundations to include more radically innovative practices.
In the second session, Callanan was joined by Braden King (2005 Film/Video), Richard Move (2002 Performing Arts) and Shawn Sides (2006 Performing Arts) for a discussion of Organizational Structures for artist-entrepreneurs. The conversation centered on the various nonprofit and corporate forms that might serve the needs of different artists: The 501c3, The Corporation (C Corp), The Limited Liability Corporation (LLC), The Limited Partnership (LP), The Fiscal Sponsor and The Benefit Corporation (B Corp). Callanan noted that the B Corp is a newer corporate form, blending a public mission with a business model; it can be structured as a for-profit corporation, LLC or LP.
In order to decide which corporate form to adopt, Callanan recommended that artists consider various aspects of their projects and projected organizations. What is the mission, or purpose, of the organization? Is it meant to create community (like a nonprofit or B Corp) or retain control (like a C Corp, LLC or LP)? What is the organizational lifespan? If the initiative is charitable in nature, would you rather work through a fiscal sponsor or set up your own 501c3? What taxes will you face? What are the risks and liabilities of your project?
Each artist on the panel then detailed which organizational model they chose to work with. Richard Move realized he needed to create an infrastructure to meet his long-term project goals, so he put together an advisory board with four committees, using the 501c3 model without the formal bureaucratic responsibilities. Move eventually set up a for-profit sole proprietorship, Move-It Productions, to remove himself from liability. Rather than applying for his own tax-exempt status, he uses fiscal sponsors like Fractured Atlas or NYFA to apply for funding restricted to nonprofit 501c3s. He noted that he seeks most of his funding from individuals, so nonprofit status is not critical for his model. 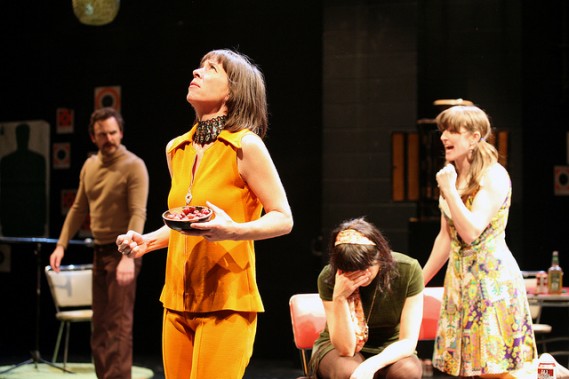 Shawn Sides and her theater group Rude Mechs started a 501c3 organization in 1996. In order to both retain control and function democratically, the organizational by-laws stipulate that founders may not be fired by the board and that decisions must be arrived at by consensus, minus one. Sides recommended creating a written document to determine what happens to the organization after the founders leave.
Filmmaker Braden King founded a single-member LLC, Truckstop Media. King found the LLC had great benefits, particularly as it separated his organizational finances from his personal finances, thereby reducing his own fiscal liability. Truckstop Media, rather than King himself, became the container of his intellectual property.
The final session in the Artist to Enterprise series focused on the important of protecting your Intellectual Property. The group was joined by lawyer Andrea Cannistraci of Cowan, DeBaets, Abrahams & Sheppard LLP, who presented various strategies and considerations for artists.
Copyright law, noted Cannistraci, protects original expression or useful inventions rather than ideas. From the moment a work is created, its creator is recognized as its owner—though it is, of course, suggested that you file with a copyright office to ensure protection. Accordingly, when using someone else’s work, figure out who owns it and do your due diligence; some items may fall into the public domain, and some copyright stipulations may allow for certain uses, but it is best to contact rights-holders to determine fair use.
Creative Commons copyright licenses build upon traditional copyright law, making legible the shareability of copyrighted work. The purpose of the Creative Commons is apparent in the title: to promote creativity through common goods, images and ideas. While copyright law still protects the original creators, the various Creative Commons licenses might allow others to “remix, tweak and build upon your work” or to merely download your work without changing it; attribution of the rights-holder is always required.
In terms of multi-partner collaborations, Cannistraci recommended discussing upfront the ownership and revenue-sharing of projects and partnerships, and, of course, getting everything in writing. In the world of music, for example, collaborators must discuss who has the rights over the lyrics, composition, mastering and music video. Hiring out contract-based work allows artists to retain rights, as specified in written contracts.
Cannistraci’s suggested resources for artists include the Volunteer Lawyers for the Arts, communications and social media expert Patricia Aufderheide, and lawyer and activist Larry Lessig. In terms of protecting intellectual property and understanding copyright law, Cannistraci asserted that lawyers are an essential part of any professional artist’s team.
We’ll be sharing more conversations from our Artist Retreat Focus Sessions in the coming months, featuring wisdom from many other artists, presenters, curators and consultants in the Creative Capital network.