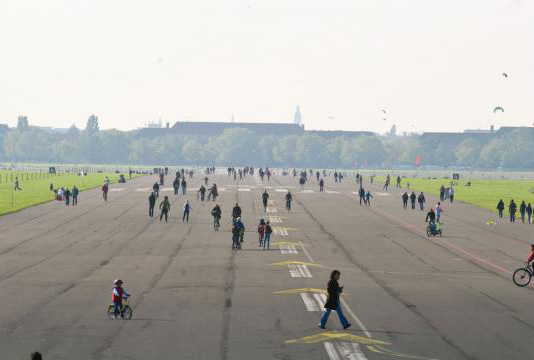 Lisa Bielawa will stage a musical performance at Berlin’s Tempelhof Field May 10-12.
Artists Lisa Bielawa (2006 Performing Arts) and Arturo Vidich (2013 Performing Arts) have more in common than meets the eye. Though they work in different media­—Bielawa is a musician and composer, Vidich is a choreographer—both Creative Capital grantees are taking on community-building and place-making in an unusual space: the repurposed military airfield.
Bielawa’s Airfield Broadcasts project has two iterations, one at the Tempelhof Field in Berlin (premiering this weekend, May 10-12) and the other at Crissy Field in her native San Francisco (October 26-27). Each performance involves between 100 and 1,000 musicians, from student groups to professional orchestras, performing Bielawa’s hour-long composition in these massive public spaces for audiences both intentional and accidental. Bielawa incorporates musical composition and choreography to fully explore the sonic and spatial relations of each former airfield.
An improviser with a dance degree from Wesleyan and a pilot’s license, Vidich is embarking on an ambitious new work supported by Creative Capital. You Are It is an interactive performance for 3,000 people (playing Tag) and a “human-powered-hybrid-electric” airplane, made and manned by Vidich and collaborator Daniel Wendlek. The plane videotapes the Tag game from the air, and Vidich is proposing to present the footage as in-flight entertainment on commercial jets. You Are It is a one-day event, taking place at Floyd Bennett Field in Southeast Brooklyn.
We set Lisa and Arturo up on a Skype date to discuss the possibilities and challenges of their projects, and their experiences with these three former airfields. Lisa Bielawa: It’s nice to meet you!
Arturo Vidich: Nice to meet you, too. Digitally. Handshake. So, you’re in Berlin right now?
Lisa: I’m in Berlin, yeah, and it’s raining right now, but I can show you something just to get us started. I’m going to show you what I’m working with, which is this map of Tempelhof Field. Do you see that blue is the Terminal Building. The largest standing piece of fascist architecture still in existence. And then I don’t know if you can see all the colored pencil marks on the runways and stuff.
Arturo: Yeah, I do. Arturo Vidich, excerpt from The Daedalus Effect and Other Dilemmas

Lisa: Yeah, it’s interesting. One of the things that I’m most excited about now is that SoundCloud has partnered with us here. Anybody anywhere in the world, if they can get here for the weekend of the event, then they can upload an audition to the SoundCloud and can be part of it, and you just come to one rehearsal that day. So what that means on the back end, of course, as you can imagine, is that the whole thing has to be supported by this skeletal structure. Not even skeletal, like a muscular skeletal structure.
Arturo: You’re much further along on your project that I am. I’m still in like the drawing, planning phases right now.
Lisa: But one of the things I love about hearing you talk is that you sound like somebody who’s at the beginning of a project.
Arturo: I am very much so, yes.
Lisa: You have great energy. You’re like “More! More!” And I’m like, man, this is all I see in Berlin, is this tiny little Airbnb apartment. I am creating performance materials 14 hours a day right now. If I go outside, which is hard on my eyes because I’m, like, so tired…you know what it’s like. So, I listen to you talk and I think, “oh, I remember those days when I…” I feel like I’m your mom, or something. Like, “when I was your age…” I remember feeling so excited about all the different communities, like “my piece is going to bring together this community and that community.” And there’s this reaching out part of the artistic process that I actually miss. But now, hearing you talk, I think “oh god, how exhausting!”
Arturo: I’m already exhausted. It’s piggybacking on the whole application process for Creative Capital. I just received, in January, the Performing Arts grant. It just blows my mind to be included in such a stellar cast of artists, and just to understand the depth of what it means to receive a Creative Capital grant. It’s a long process, as you remember; it’s like nine/ten months from when you’re thinking of what to apply with all the way to hearing back. So, during that time, I wasn’t just sitting around waiting for the project, to hear about whether I got the grant. I was developing the project, thinking “if I don’t get the grant, at what point do I say I cannot do this project?” And there is no point, because all you have to do is rejigger it a little bit to make it so that some aspect of it is still possible.
Lisa: Well, you’re talking to somebody who has rejiggered. This is something I’m not at all shy to talk about, because what happened with this—and I spoke to Ruby Lerner at Creative Capital about this, too—what happened with this project was that we did some crowdfunding and looking for funding in the States. But we applied for 11 grants in Germany. We got zero of them. ZERO of them. So, the version that I’m going to be slapping together, with all kinds of love and rigor, is really, I would say, almost down to a tenth the size—in terms of budget. It’s amazing how grassroots you can suddenly get if you have to be.
Arturo: I know, I have several budgets that I’ve laid out: the pie in the sky and the bare minimum. I’m flexible, but I’m also hopeful. I mean, this is the beginning stages of any project. You’ve got your budget, all the grants say “pending,” all the foundations—nobody’s gotten back to you yet, whatever, but just being able to divide up the project and be plastic-minded about it, and not have to feel like everything has to go 100% or you’re not going to be able to do any of it…
Lisa: That is really tricky. And this SoundCloud thing is great but people have to audition. When you involve so many people you can’t necessarily dictate the motivations of all these individual people. And some of them really want to but they play an instrument you can’t hear on the field! How do you find a way to be flexible when there’s no electricity out there?
Arturo: Battery-operated amp!
Lisa: Battery-operated amps, we’re using those in San Francisco, but here there’s not the budget for them. I mean, if there was nothing in the budget, I’d pay the filmmaker. That’s what I’ve learned from Creative Capital. No matter what happens out there, even if I lay a big ol’ egg, I want it to be captured. And this filmmaker has actually gotten really interested in the aspects of the problems we’ve had here raising money, and the cultural thing, too. He wants to make a documentary film of his own about the process of getting this project off the ground in these two cities.