Anita Chang’s "Tongues of Heaven" Asks, What Is Lost When a Language Disappears? 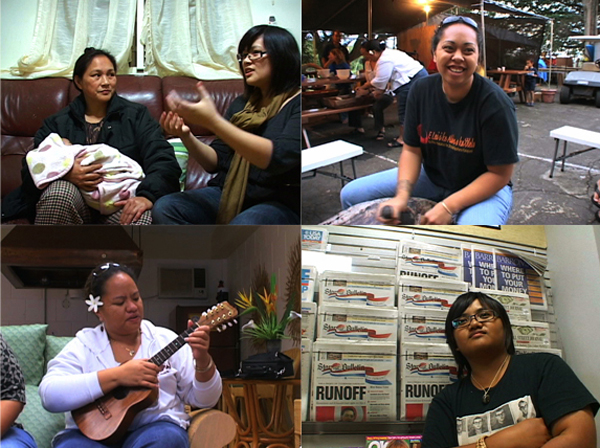 Anita Chang (2008 Film/Video) will premiere her Creative Capital project, Tongues of Heaven, at the Los Angeles Asian Pacific Film Festival, with screenings May 4 (2:30pm, CGV Cinemas) and May 11 (12:30pm, Art Theatre of Long Beach). Set in Taiwan and Hawai’i, Tongues of Heaven focuses on the questions, desires and challenges of young indigenous peoples to learn the languages of their forebears—languages that are endangered or facing extinction. Using digital video as the primary medium of expression, four young indigenous women from divergent backgrounds collaborate and exchange ideas to consider the impact of language on identity and culture.

I connected with Anita to learn more about this new film and her experimental approach to documentary.

Anita Chang: The issue of a language not being passed down to the next generation has always been a part of my life. My first language was Taiwanese or Minnanese, which is still the language my parents speak. I gradually lost my ability to speak it when I started learning English in the U.S. However, I can still understand it quite well. I recall many moments when my grandmother would complain that my brother and I did not speak Minnanese, or that my mother did not pass it down to us. In fact, as children it was my brother and I who fiercely protested against speaking it, explaining to my mother that no one else in our small town in Ohio was speaking it.

It wasn’t until I became an adult that I realized my regret at not speaking my mother tongue, given how difficult it is to re-learn it. In particular, as Taiwan’s oppositional politics achieved prominence after the lifting of Martial Law in 1987, a sort of postcolonial moment opened up the possibilities of new personal and public expression, which entailed the realms of history, identity, culture and language. This could be felt not just on the island but also among those Taiwanese in diaspora like my parents. Many Taiwanese, including myself and my relatives, became interested in who they had become under successive colonial rule (or what was denied or suppressed), who they are now and what will they become? Of course, language is a major component in this regard.

It wasn’t until I started living and working in Taiwan that I learned of the incredible diversity of languages spoken on the island. For example, while teaching film in the Department of Indigenous Languages and Communications at National Dong Hwa University, a public university located in eastern Taiwan, I was made keenly aware of a certain lament by my students in their limited (if not entire lack of) ability to speak their mother tongue, their linguistic heritage being from one or more of the 14 distinct indigenous languages, Minnanese and/or Hakka. As a note, in addition to the 14 indigenous languages that correspond to the 14 current officially recognized indigenous groups in Taiwan, 12 indigenous groups have yet to be recognized. Many of my students come from mixed heritages and are sometimes exposed to multiple languages. However, the conversations were far more complex than a sense of loss. Mandarin is the official language in Taiwan and some schools, depending on teacher availability, will offer minority language classes, but rarely enough to achieve fluency. As such, some students chose to study in our Department to learn more about their heritage and study their languages.

My linguist colleague Yueh-Chen Chien also served as an inspiration for the documentary when she handed me David Crystal’s book Language Death, which argued the high stakes of language loss for humanity. In my research, linguists estimate that about 3,000 of the world’s 6,000 or so languages are liable to disappear before the year 2100. That is two languages disappearing each month. With 96% of the world’s population speaking only 4% of the world’s languages, I wondered, what does it mean to speak one’s mother tongue? Or to put it in another way, what do you lose when you lose your native language?

Official trailer for Tongues of Heaven

Jenny: Your film weaves together footage shot by four young women exploring their indigenous languages. How did you meet the young women and begin to follow their journey?

Anita: In my recruitment for collaborators in a media management course I was teaching, two students—An-Chi Chen and Shin-Lan Yu—enthusiastically joined the team, while a few others wanted to share their stories for the film. The inclusion of Hawai‘i was initiated by our Dean at that time, who had visited Ke Kula ‘o Nāwahīokalani ‘ōpu‘u (Living Hawaiian Life-Force School), a well-known K-12 immersion school in Hilo on the Big Island. He encouraged us to visit the school. Our team also felt that a comparative approach would be fruitful, particularly with Hawai‘i, which has developed successful educational models for learning Hawaiian since the early 1980s and is known worldwide for its language revitalization efforts. Finally, An-Chi and Shin-Lan also believed that speaking with other indigenous youth their age could foster insight and support as they confront the daunting prospect of language loss.

The late Māori filmmaker Merata Mita—for whom the film is dedicated—was teaching at University of Hawai‘i, Manoa (UH) at that time, and she led me to a former student of hers, Malia Nobrega, who became the field producer for the project. Malia herself learned Hawaiian at UH, and is active in the United Nations and international forums on indigenous issues such as biodiversity and bioprospecting. She recruited two young women, Kainoa Kaupu and Hau‘oli Waiau, and by August 2008, our team was ready to begin our collaboration.

Jenny: I’m really interested in your approach for this documentary—putting the cameras in the hands of your subjects. How did you develop this filmmaking strategy, and what do you think the benefits of it are?

Anita: All camerawork is personal to a certain extent. It is only when spectators become or are made aware of the personalized nature of the images they are seeing that they identify the author and perhaps identify with the author. There is added meaning to these images, as opposed to those images created through a hidden apparatus. They mean something to the person who is handling this technology and pointing at the world. Personal camerawork also foregrounds the nature of subjectivity. However, we have to remember that it is only a strategy for seemingly greater authenticity, which inevitably diminishes its reflexive potentials, that is, when the medium reflects upon its own construction. What I have tried to do with Tongues of Heaven is to take seriously the varying degrees of authenticity you can achieve with personal camerawork, not through an arrival at some Truth, but through expressivity and relational looking. Every time we look—whether behind or in front of the camera, or sitting in front of a screen—a relationship is enacted. How this relationship works is a major aspect of the experimental practice within this new work.

On social and cultural levels, I have been an advocate of increasing access to media technologies for those who historically have not had access to them. I myself ventured into this territory because I did not see images that adequately reflected my own experiences. But more importantly, I became interested in being a maker precisely because I was drawn to experimental cinema, not documentary per se. I brought this core interest to my research and development for Tongues of Heaven, and to my work as a mentor.

I was fortunate to have a team that consisted of a dynamic group of women, with a love of moviemaking. The women shot much of the footage, which was a result of workshops that I conducted teaching them the basic skills and techniques of camera, lighting, and sound recording. I presented them with exercises to consider the multiple relationships between vision and hearing in a moving image medium. I wanted the collaborators to have an intimate experience first with image and sound before bringing dialogue into the exercises. Without delving immediately into discussions about language, I provided prompts that expanded the entry points into an extremely complex issue—points that could take advantage of the creative potentials of the moving image medium. For example, one of the first prompts was: Capture your comfort zone.

The benefits of this strategy are that rumination and imagination through moviemaking can be a viable form of knowledge production and reflection. Each woman brought her own discoveries to the work, ranging from renewed motivation for language revitalization to deep ambivalence. Thus, as the work evolved, Tongues of Heaven became an experimental documentary meant to instigate dialogue, rather than to project a definite view that language revitalization is a necessary must. During a culminating workshop, the team met in Hawai’i to share their footage—and through these images, the young women shared their insights and concerns related to the challenges of revitalizing their languages.

Jenny: What other projects are you working on right now?

Anita: I’m working on an interactive web platform using Tongues of Heaven to foster youth-centered dialogue and creative participation around issues of language revitalization. I also have some other movie projects in the works: a study of contact zones via colonial postcards, old family photographs and testimonials; a film about what happens when a friend dies from homelessness; and a tribute to Raul Ruiz.

Anita Chang’s Tongues of Heaven premieres in the Los Angeles Asian Pacific Film Festival, with screenings on May 4 and 11.