Kristina Wong: "What Lengths of Self-Humiliation Will I Go Through to Meet My Kickstarter Goal?" In March, Kristina Wong (2006 Performing Arts) wrote this hilarious article for xoJane  chronicling her Kickstarter campaign to bring her new show Going Green the Wong Way to the Edinburgh Fringe Festival. In the end, Kristina persevered, raising over $16,000—her show opens at Edinburgh Fringe today! We thought other artists who have used crowdfunding sites could commiserate with Kristina, and maybe learn a thing or two from her experience.
Part 1:  The Kristina Wong panhandling tour of 2012 Begins!
I can’t say I know what it is like to sell my body for money, but running a Kickstarter campaign is probably pretty damn close. With less than a month to raise about 10k, prostitution seems like a downright brilliant alternative to the butt kissing, groveling, and pestering this campaign has made me sink to in the last month to get me to about 30% of what feels like an astronomical fundraising goal—$16,000 that I must raise in full by June 1.
I know, I know. $16,000 is far from chump change. It’s more than what I owe in student loans, more than what I pay in rent each year, more what many Americans make annually. It’s also the unfortunately high cost to bring my solo theater show “Going Green the Wong Way” to the Edinburgh Fringe Festival this summer and what it will cost to administer this fundraiser (Kickstarter takes 5%).
The Edinburgh Fringe is the largest Fringe Theater Festival in the world and what I hope is a major game changer in my career — an opportunity to showcase my show for a month-long run to increase my longevity in an otherwise “running on empty” career as a live performer who addresses a lot of (commercially unpopular) social justice topics. Whilst making a living doing theater, especially into my 30s, with no real retirement plan nor “Plan B”– the urgency to “step it up” onto a global scale, comes more urgently than ever.
This particular festival is the opportunity I’ve been waiting for to bring my work outside of the United States for the first time, and expand the visibility for my work so I can keep making a living. This risk is me throwing the last of my cards on the table.
I’m no stranger to shaking my hobocup into cyberspace. This Kickstarter marks the third time in two years I’ve attempted a “crowdfunding” campaign and the first time I’ve attempted to raise this much. This means, that I’ve numbed people to simple pleas to “throw a little in the hat.” That means, my small fan base has been tapped … twice before. That means, I’m running out of resources.
That means…. it’s getting desperate. Really really desperate.
And because Kickstarter uses an “all or none” fundraising model, if I come up just a buck short of 16k, I still lose everything I’ve raised. So basically, my life this month is like a really stressful low budget version of LOST, if LOST was about a plane crash where the survivors had to raise $16K on an uncharted island.
Just how desperate am I?  Take a look at my tactics to be a one woman PBS telethon.
1.  Turn myself into a human sweatshop. Give me money and I will use my college degree to immortalize your pet on fabric.
Part of the success of my past fundraising campaigns is that I offered to make handsewn dolls for people if they gave $50 in the first week of the campaign — I made my goal of $1,500 in four days. And it took twice as long to sew up all the dolls by hand. I even offered to sew replicas of people’s pets. In theory, if I raised 16,000 all through $50 and $100 pledges, I’d have to sew 400-800 dolls. Woohoo! Chinese American sweatshop!  It’s a tactic that worked, and then as I’ve found, stopped working. 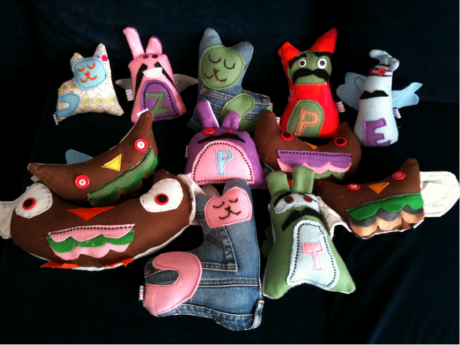 I think my handmade vagina puppets are the coolest Kickstarter perk imaginable, but despite the hand-sequined clitorises, I’ve only been able to move less than 10 of these at pledges of $69 and $100. It’s practically a fire sale on vagina! Not everyone is a fan of my genital seamstress skills.  This note came via my aunt on behalf of my grandmother with her donation.  Ouch!
3.  Offer to show my boobs to people who give within a specific 24 hour timeframe. When quirky handicrafts fail, start selling your body. Even in a silly way. I could feel the feminist backlash, as one female friend remarked, “This (offer of going topless) makes me not want to give.”  While all my donors that day were men, it was mostly men asking me NOT to resort to showing my boobs for money.
4.  Write that broke guy I shouldn’t have hooked up with in the first place, only to relive the original trauma and learn that he is still broke.
Desperation means ripping open those finally healed wounds of love and pouring salt directly back in. Now why did I think that the broke guy from the past would come into a crankload money that he’d want to share with me?  Why did I give him enough credit to be able talk about something other than sex? It’s too bad Kickstarter can’t monetize bad hook-up offers, because I would have reached the goal by now as the above exchange is about all I seemed to get from dudes of this ilk. And as of this writing, dude still hasn’t given me a buck.
5.  Write people who I never slept with as if I slept with them once.
Threaten to go public about our relationship, publicly.   Surprise! This tactic, as many times as I cut and paste it, did not work either. Though I did score a few “likes.” Nothing piques the curiosity of my future donors than getting to see who raised the desperate fundraising heathen that I am. My family never gets in videos with me, ever. But I begged and promised to be a good daughter to them, hoping that the charm of my Asian parents on YouTube would turn a few new donations. I did get a spike of donations. But here I am again, shaking my cup.
7.  Make empty promises. Just when I had mastered the art of filtering my thoughts before I speak, now I have lost all sense of class when I cyber-panhandle. My pleas went from reasonable requests of “Help me reach my dream!” to “This is a stick up!”
8.  Relive the pain of youth and try to get in with the cool kids. Tough times for Mercy High School’s Former Senior Class Vice President, National Speech Champion and Class Salutatorian as I did a wall-to-wall panhandling campaign of everyone I went to high school with. Nothing made me feel more tasteless than dropping my spamalot on high school friends who were already holding down families of 2 or 3 kids or basking in the glow of childbirth. It’s a bizarre trip down memory lane to drop in momentarily on everyone’s Facebook profile to find that everyone seems to have gone on to live healthy happy lives of relationships, careers and babies while I’m begging for cash from the futon couch I sleep in.
While many of my former classmates ignored me (not unlike high school), I was pleased that one of the cheerleaders, a fellow theater geek and a friend from Speech Team showed me some cash love. But more importantly, they didn’t further shame me for not becoming an engineer or doctor.
9.  Retroactively collect payment for (not) putting out in High School. Talk about target marketing. I didn’t “give it up” at all in high school (or college or post college … But that’s another blog) because I went to dances mostly gay men and my best friend Danielle. Plus I was (and still am) a bonafide weirdo. But my thinking with this cyber-panhandling philosophy is that people like to be reminded that they never had sex with you.
I’d list more of the depths of grovelry I’ve sunk to, but I need to go break up a wedding or something for a nickel. One thing is for sure, after this Kickstarter campaign is over in less than three weeks, I’m going to be able to look a crack whore in the face and say, “I feel your pain sister.”