Xenolith is a speculative fiction told across a single-channel short film, an artist’s book with an augmented-reality app, and stone sculptures. Taking its title from the geological term for an alien rock fragment incorporated by a larger formation as it cools from magma into stone, the work thinks through notions of being changed by queer metabolisms and deep-time contaminations. The film takes place around a geothermal power plant in Iceland where excess carbon dioxide gas is capped, liquefied, and injected into subterranean bedrock. Here it mineralizes as calcite within the porous cavities of basalt stone—forming a synthetic xenolith. It is a material of queer subjectivity: a transformed body whose holes are filled with foreign matter. The fossil-fuel industry first developed the technique to maximize fuel extraction from emptied reservoirs. Berrigan follows how minerals are transformed and mobilized by different conceptual and political agendas in the climate crisis, and interprets geological matter as sculptural, visual, digital, and textual media. Although geoengineering is proposed to combat global warming, it nonetheless leaves extractive infrastructures intact. Synthetic xenoliths as carbon capture and sequestration could simply be greenwashing, but they could also present as troubled metaphors for adapting to life in a contaminated world. Imagine xenoliths as what Lauren Berlant calls a “glitch”: “an interruption within a transition, a troubled transmission. A glitch is also the revelation of an infrastructural failure.” 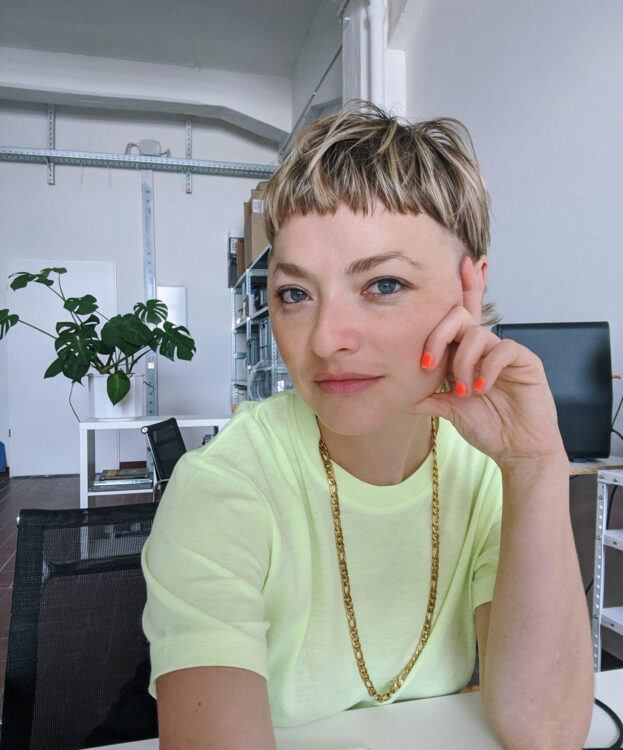 Caitlin Berrigan works as a visual artist, writer, and researcher. Her early works address viruses and the spatial choreographies of capitalism and contagion. Recent works explore poetics and queer science fiction as world-making practices through instruments and moving image. She has been developing a speculative cosmology, Imaginary Explosions, that blends research science with art and fiction. The episodic series centers geological animacies as transfeminist scientists cooperate with the desires of the mineral earth to simultaneously erupt all volcanoes. The work has been the subject of a book (Broken Dimanche Press, 2018); a 2019 solo show at Art in General, reviewed in Artforum; a world premiere in the 2020 Berlinale Forum Expanded exhibition; and a 2023 solo show at JOAN Los Angeles. She has presented her work at the Whitney Museum of American Art, the Poetry Project, Henry Art Gallery, the Carpenter Center for Visual Arts at Harvard University, Anthology Film Archives, La Casa Encendida, Ashkal Alwan, the Goldsmiths’ College, and other international venues. Her experimental essays are published by e-flux, Georgia journal, MARCH, and Duke University Press. She has received fellowships and residencies from the Alexander von Humboldt Foundation, the Skowhegan School of Painting and Sculpture, the Graham Foundation, and the Akademie Schloss Solitude. She earned a master’s in visual art from MIT and a BA from Hampshire College. Currently an artist-in-residence at the Caltech-Huntington-NASA Jet Propulsion Laboratory, Berrigan has held full-time and visiting faculty positions at NYU Tisch School of the Arts, Bard College Berlin, Harvard University, and UMass Boston.