Emily Johnson is an artist who makes body-based work that considers the experience of sensing and seeing performance.

Shore is a multi-day performance/installation of dance, volunteerism, feasting and storytelling. It is a place audiences choose to visit once or many times, as participants or observers. The project develops in each venue over an extended period of time, requiring conversation and collaboration amongst organizations. Shore begins with a feast, followed by a night of curated storytelling. During the day, participants propose and carry out volunteer activities needed in their home communities. Staged performances that move from outdoors to the stage take place at night. 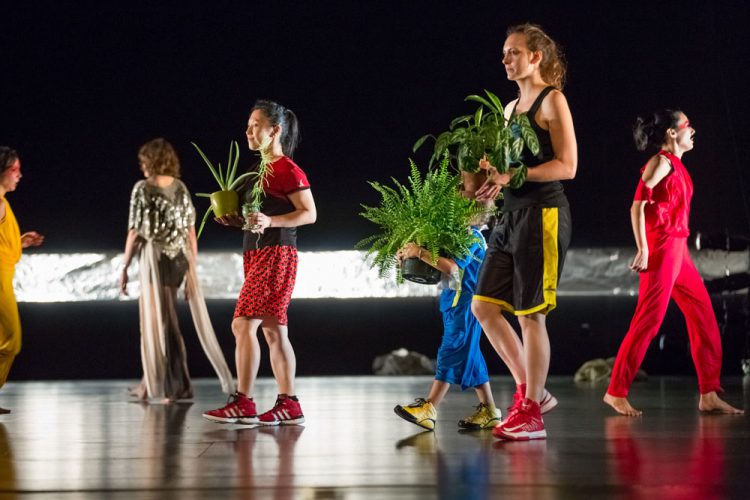 Emily Johnson/Catalyst is bringing the expansive installation SHORE to New York this month, with gatherings and events throughout the city and performances at New York Live Arts. SHORE expands beyond the theater to celebrate the places where we meet and merge—land and water; performer and audience; art and community; past, present, and future. Emily Johnson is an artist who makes body-based work. Originally from Alaska, she is currently based in Minneapolis, Minnesota. Since 1998 she has created work that considers the experience of sensing and seeing performance. Her dances function as installations, engaging audiences within and through a space and environment—interacting with a place’s architecture, history, and role in community. Emily received a 2014 Doris Duke Artist Award and her work is currently supported by Creative Capital, Map Fund, Native Arts and Cultures Foundation, a Joyce Award, the McKnight Foundation, and The Doris Duke Residency to Build Demand for the Arts. Emily is a current Fellow at the Institute for Advanced Study at the University of Minnesota, a 2014 Fellow at the Robert Rauschenberg Residency, a 2012 Headlands Center for the Arts and MacDowell Artist in Residence, a Native Arts and Cultures Fellow for 2011, a MANCC Choreographer Fellow, a MAP Fund Grant recipient and a 2009 McKnight Fellow. She received a 2012 New York Dance and Performance “Bessie” Award for Outstanding Performance for her work, The Thank-you Bar, at New York Live Arts. Her work, SHORE, which is equal parts feast, volunteerism, story and performance, premiered in June 2014.