Jasmín Mara López’s Creative Capital Project, Silent Beauty, is a lyrical and sensitive autobiographical exploration of her family history with child sexual abuse and a culture of silence. The film premieres virtually and in-person at BlackStar Film Festival on August 5, an annual celebration of the visual and storytelling traditions of the African diaspora and of global Indigenous communities, showcasing films by Black, Brown and Indigenous artists from around the world.

Read on to hear from the 2020 Creative Capital Grantee about her inspiration for the film, mining her family’s archives, and the community she found in other survivors. I became a filmmaker the day I decided to share my story publicly in 2015. I never would have imagined then that I would be supported by organizations like Creative Capital to create this work of art—a 7-year project that had to happen in a mostly organic way and that would contribute to the healing of so many. The idea behind Silent Beauty was clear from the start: to highlight the beauty that so clearly existed within my family but that was overshadowed by the trauma of child sexual abuse. Here’s when I first received the trove of family archival footage to use in my film. The storytelling was about to begin. While the birth of my niece was the catalyst for disclosing abuse to my family, I couldn’t deny that the children within us were at the core of this project. This work would be for them first. My mother’s story has also been an inspiration from the start. Despite our challenging relationship, she dropped everything to support me in confronting my abuser, her father. As I unearthed our family’s story, and continued on my path to healing, she was also finding hers. 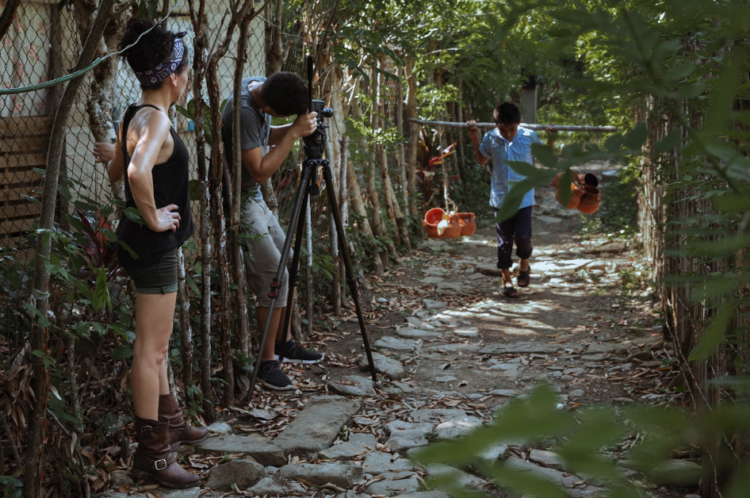 On production with director of photography Bron Moyi and the Martinez family. Photo: Alejandra Rajal

A turning point in my recovery was the realization that my grandfather was also an abused child. In telling his story, because it was part of mine, I found acceptance. Here we are behind the scenes of a production that shared a part of my grandfather’s story in Mexico, in collaboration with the Martinez family and Grupo Teatro Ajuatitla. We revisited our childhood home, my grandparents home, during the production. It was for sale, and it happened to be an open house. I walked through the place that brought me both love and terror. I felt nothing, not even while I stood at the doorway of the room where so many were abused. It wasn’t until I watched my home from this perspective that I saw my cousins playing, my grandmas cooking, my dogs barking. I watched as we hopped into the van like we did every Sunday for church. I did pull ups on the avocado tree that is no longer there.

Notes and an excerpt from phone calls with survivors that have reached out to the artist after learning about Silent Beauty. Photos: Jasmín Mara López

I’ve been able to find community in other survivors. Since launching the Silent Beauty campaign, survivors and their family members have come to me with their stories and words of encouragement. I’ve taken inspiration from other artists along the way. Their words and passions carried me. Another survivor, C.C., that the artist connected with. Photo: Jasmín Mara López

I’ve learned to both challenge and embrace the sadness that comes to me in crushing waves. I open my arms to it and allow it to run through me. Then, I remind myself of those that love and support me. Those that tell me I inspire them. I know I’ve done good. I reach for them and tell them I love them. Surely they swim in these waters too.

BlackStar Film Festival runs from August 3 to August 7. Silent Beauty will be shown on Friday, August 5, at 5:00pm ET in-person, and 6:00pm ET virtually. Get tickets.