From Jen Shyu’s performance of “Song for Naldo”

Today, one of our ancillary programs, the MAP Fund, announced their 2016 round of artist projects. Thirty-six new works in contemporary performing arts will receive a total of $1.1 million in direct support for project development, creation and premiere.
We noticed some interesting themes and connections between the new projects, so to get a better sense of them, let’s take a look at a few.
Rural Communities
A few projects this year are focused on rural communities outside the large metropolises in the U.S. where arts programs are typically focused. Roadside Theater, a part of Appalshop, an multidisciplinary arts organization in Appalachia, will produce Performing Our Rural Future, a musical play about the end of coal mining and the rise of a younger generation committed to a better life founded on a just economy. The organizations will collaborate with people based in Letcher County, Kentucky, which has one of the richest cultural heritages in the U.S., but is the poorest and sickest congressional district in the nation.
Multilingual artist Jen Shyu performs the musical Song of Silver Geese in six languages: English, Taiwanese, Tetum of East Timor, Korean, Javanese and Indonesian. If that’s not impressive enough, Jen plans on bringing the musical drama to all 50 states, focusing on small towns less exposed to cross-cultural and innovative art. In 2012 the last lesbian bar closed down in New Orleans, and increasingly, LGBTQ friendly bars are shuttering their doors across the country. The collective of queer artists and activists known as Last Call hope to interrogate this trend and bring lesbian bars back to life with ALLEGED LESBIAN ACTIVITIES, a merging of cabaret, burlesque, drag show and theatrical staging.
Retelling Historical Narratives
One panelist who helped to choose this year’s MAP Fund grantees, Thomas F. DeFrantz, noted that, “White privilege, as something that needs to be scrutinized and dismantled, seemed to bubble through many of the proposals.” Among some projects that fit this theme is The Plantation Remix led by Cristal Truscott. Created by Cristal Truscott and Progress Theater, the ensemble will bring the “Neospiritual” a’capella musical to historical plantations across the U.S. to investigate the racial legacies that haunt Americans today. The performance will remix “traditional” plantation reenactment performances that often present one-sided historical retellings in homage to pre-Civil War lifestyles of white society at the expense and erasure of those enslaved.
Cherokee artists and community activist DeLanna Studi will work with director Corey Madden to explore how the Trail of Tears still affects current generations in her project And So We Walked… DeLanna retraced her ancestors’ footsteps along this 900-mile torrid historical path with her 70-year old father, all while recording interviews and personal experiences. The new work will explore how the removal affects both modern Cherokee and non-Cherokee people along the Trail.
Jawole Willa Jo Zollar has been exploring the Great Migration through a series of performances. Her fourth installment will recreate a fictional Kansas City jazz club in a piece called SCAT! The new work involves vocal performers and live bands that will interact with audiences as they might have at actual jazz clubs between the 40s and 70s. 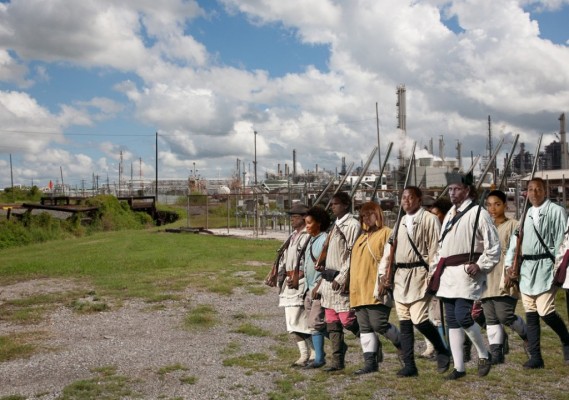 Scale
The 2016 projects run the spectrum in the theme of scale, starting with Jen Shyu’s one-woman show to Dread Scott’s massive Slave Rebellion Reenactment. With the help of hundreds of re-enactors, Dread Scott will reanimate the German Coast Uprising of 1811 over the span of 26 miles. The audacious performance will mirror the incredible fight of the slaves who rose up against New Orleans, not just for their own emancipation, but to end slavery altogether.
Lisa Bielawa has been working on an episodic opera, Vireo, that airs live on public access television stations across the country. Based on Lisa’s research at Yale, the piece tells the story of female hysteria through time, as witch-hunters, early psychiatrists and modern artists variously have defined the condition.
There are so many more great projects and themes to explore! To read more about these and other 2016 MAP Fund grantee projects, check out their website here.