Whether you’re heading to Sundance or not this year, you’ll want to know about the amazing films our Creative Capital artists are screening there. From an artist actually lighting themselves on fire, to a true story about a man who used goat testicles to allegedly cure impotence, these are sure to be unmissable, powerful films. Sundance Film Festival runs from Jan 21-31. Read about all the Creative Capital artist films and VR experiences you’ll be able to see there below.
Also, be sure to follow us on Instagram, as we’ll have some of the attending artists (*cough* Penny Lane) guest posting for us!

The subject of Penny Lane’s Creative Capital project, NUTS!, lied for a living, so it’s difficult to tell fact from fiction. But Dr. John Brinkley really did claim to have cured impotence in his patients by implanting goat testicles in them. Penny brings a new flair to the story, as each chapter of the film is illustrated by a different artist. The Sundance screening is a world premiere for the film–check out an interview with Penny about it here. “The Illinois Parables” by Deborah Stratman

Sundance will also host the world premiere of Deborah Stratman’s Creative Capital project, The Illinois Parables. The film is a dreamy suite of parables focusing on the midwest, and specifically Illinois, often called a miniature version of America. Through experimental documentary, the Chicago-based artist and filmmaker explores how doubt and mysticism can allow others to re-interpret historical events. 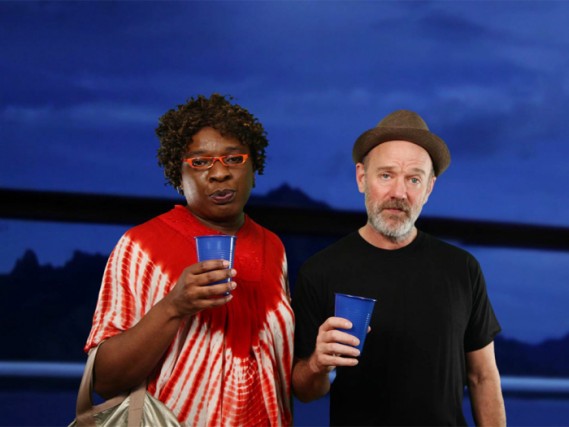 “Across the Line” by Brad Lichtenstein

Brad Lichtenstein worked with artists Jeff Fitzsimmons and Nonny de la Peña to create an immersive virtual reality experience that puts the audience in the perspective of a woman seeking health care at Planned Parenthood. The installation is evocative, powerful and timely as women’s healthcare issues are forefront on the political agenda.

Transgender artist Cassils is on fire. Both literally and figuratively, with a recent New York Times interview and a showing of Inextinguishable Fire, in which the artist literally lights themselves on fire, using Hollywood stunt techniques. Cassils hopes the film will help viewers think more critically about different bodies: “When you look at me, you’re not seeing my body, you’re seeing, in this case, an abstracted human form engulfed in flames and you can place yourself in that position for a moment….” Reggie Watts’ reputation precedes him, but you may not have known he’s also a Creative Capital artist for a project he presented in 2010. This year, he heads to Sundance with Waves, a virtual reality story. Go down the rabbit hole with Reggie and subject yourself to his philosophical inquiries, hilarious insights and, of course, musical genius. Caveh Zahedi is one of the most prolific, hilarious documentarians out there, so we love hearing about his new projects. At this year’s festival, Sundance will screen Zahedi’s animated short, Bob Dylan Hates Me. There isn’t much information on what the film entails, but knowing Caveh and his work, it will probably be exactly what the title says, and it is sure to be hilarious. At least for everyone besides Bob Dylan.
Jillian Mayer and Lucas Leyva will also participate in a spotlight panel on Jan 22 as part of the Latino Reel line up that coincides with the festival in Utah. For more information, see their website here.
Europe will see its fair share of film festivals this winter as well, with the Rotterdam Film Festival in Amsterdam and the Berlinale Film Festival in Germany.
Rotterdam Film Festival (Jan 27 – Feb 7)
Elisabeth Surbrin – A Woman, A Part
Berlinale Film Festival (Feb 11-21)
Wu Tsang – Girl Talk
Mike Crane – Bunker Drama
Mariam Ghani – What We Left Unfinished (panel presentation)
Deborah Stratman – The Illinois Parables
Jennifer Reeder – Crystal Lake