Last week, we continued our 15th Anniversary celebration with our Benefit and Auction. Nearly 200 guests came out to the gorgeous Studio 450 in Chelsea, which boasts stunning rooftop views. We were so lucky to have four incredible Creative Capital Awardees perform for our guests: Kristina Wong was our hilarious emcee; Daniel Bernard Roumain played an emotional tribute to Ruby Lerner and the impact of performing arts on his life; Sanford Biggers and his band Moon Medicin rocked the house with their performance and accompanying projection of Biggers’ video work; and Jace Clayton (DJ /rupture) provided the soundtrack for the rest of the night. It was a magical evening, and we couldn’t have done it without the generous support of our Benefit Chair, Paige West, and all the members of the Host and Benefit Committees. The space at Studio 450 ready for our guests The performances begin! Kristina Wong, our Benefit Emcee, took the stage as a representative from Homeland Suck-urity. 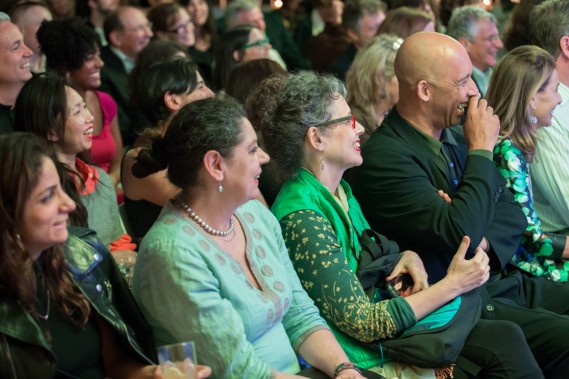 The audience shares a laugh. Daniel Bernard Roumain plays his violin for the crowd. All photos by Gulshan Kirat.