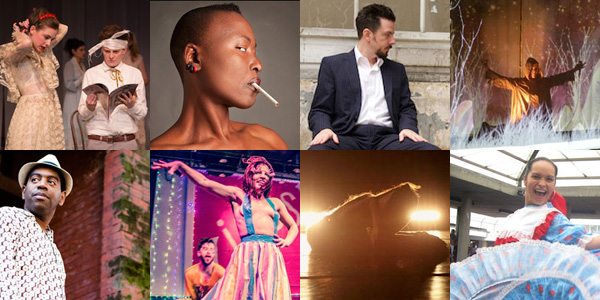 Top, left to right: New York City Players, Nora Chipaumire, Thaddeus Phillips, Cloud Eye Control. Bottom, left to right: Yosvany Terry, Laura Arrington and Jesse Hewitt, luciana achugar, The Civilians.
The MAP Fund, administered by Creative Capital, supports artists, ensembles, producers and presenters whose contemporary performance work embodies a spirit of exploration and deep inquiry. With today’s announcement of 41 breathtaking projects that make up the 2013 round, we are pinching ourselves at the privilege of this work!
Thanks to the generous support of our funders, the Doris Duke Charitable Foundation and the Andrew W. Mellon Foundation, MAP will provide $1.4 million in project-specific and (ever more rare) general operating cash grants. In a clear testament to the vibrancy of the field of contemporary experimental performance, the works were selected from among more than 800 proposals and reviewed by a small army of artists and arts professionals from all over the U.S. The result is a dream-team of composers, choreographers, playwrights, directors and performers who will, no doubt, teach us to believe the unbelievable and fathom the unfathomable.
And now, a criminally abridged look at MAP’s map, if you will:
This year at Minneapolis’s Children’s Theater Company, theatergoers can look forward to Taylor Mac leading them through The Fre, his queer love story for multigenerational audiences that questions accepted notions of “correct” sexual, moral and intellectual behavior. Did I mention it’s set in a mud pit?
In Philadelphia, Thaddeus Phillips brings his solo performance and writing chops to matters of political frontiers and their permeability (or not) in 17 Border Crossings // 17 Fronteras.
In Seattle, addressing the darker but utterly urgent issue of guns, the inimitable Dayna Hanson will create The Clay Duke, which looks at a 2010 shooting in a Florida school-board meeting through the lens of Chekov and Charles Bronson.
And, while all MAP grantees are awarded to arts organizations based in the U.S., this year’s artists are an especially globetrotting group. New York-based ensemble The Civilians—among the 50 percent of this year’s pool who are first-ever MAP grantees—will create a work inspired by the real life annual beauty pageant in El Buen Pastor women’s prison, the national women’s prison in Bogotá, Colombia.
The new music ensemble Alarm Will Sound teams up with Irish composer Donnacha Dennehy to investigate the political implications of the Great Famine in nineteenth-century Eire.
And choreographer Nora Chipaumire will undertake a two-part, three-continent (Africa, Europe, North America) exploration of Stravinsky’s Rite of Spring and the role it played in the European art movement known as Primitivism.
There’s more! In San Diego, a vacant lot will temporarily become a drive-in playing Chekov; on the Upper West Side a performance about class systems will take place in a Jacuzzi; in South Carolina, they will dance the problem of the confederate flag; in Austin, they will dance the heroics of electric linemen!
Indeed, the only common characteristic of this year’s grantees seems to be the determination to upend expectations and defy predictability. That’s why we’re so proud to support them. I hope you’ll join us in following the evolution of these great works.