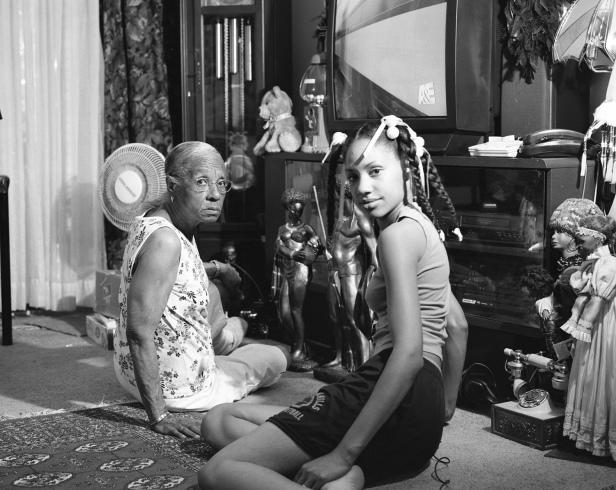 LaToya Ruby Frazier (2012 Visual Arts) has been photographing her family and her hometown of Braddock, PA, since she was 16, bearing witness to Braddock’s decline from a booming steel mill town to a “distressed” municipality with widespread pollution and increasingly scarce jobs.
This Friday, LaToya’s first solo museum exhibition opens at the Brooklyn Museum. Through the 40 photographic works presented in The Haunted Capital, Frazier offers an intimate portrait of the effects of deindustrialization on the lives of individuals and communities. Although LaToya is best known for the photographic work featured in The Haunted Capital, in recent years her work has extended beyond this to include performance, activism and public art. In 2011, in collaboration with artist Liz Magic Laser, LaToya developed a performance in response to a Levi’s ad campaign that used Braddock as a backdrop to present images of “urban pioneers,” with slogans like “Everybody’s work is equally important.” As a protest against the false vision of Braddock that she saw projected in this campaign, LaToya carried out a choreographed series of movements on the sidewalk in front of the a Levi’s store in the SoHo neighborhood of New York. Wearing Levi’s clothing from head to toe, LaToya “distresses” the jeans she’s wearing by repetitive rubbing and scraping along the sidewalk, ultimately destroying them. The performance was captured in an episode of Art21.

In 2012, LaToya was awarded a Creative Capital grant for her forthcoming project A Monument for Braddock, which the artist proposed to build on the lot where her childhood home once stood, before it was demolished in 2004. The Monument, which is in the early stages of development, will house shrines, statues and photographic archives documenting the lives of long-standing residents born and raised in Braddock. LaToya’s Monument will present a new kind of landmark in response to the demolition and gentrification that has uprooted and erased much of the community’s history.

LaToya Ruby Frazier: The Haunted Capital is on view at the Brooklyn Museum from March 22 – August 11.